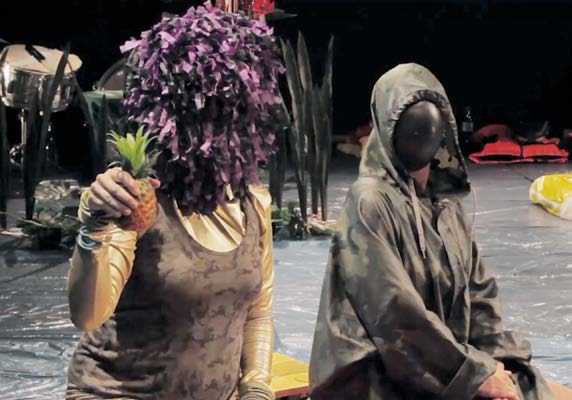 The actress and performer Mariana Senne invited me with a broad idea of sounds and music she would like to have in the performance that she was creating alongside with the also theater-makers Gianna Pargätzi (HI/GI) and Laura Kallenbach, the visual artist Jan Brokov and the choreographer Lu Favoreto. A collaboration between Brazilian and German artists.

The inspiration for their performance is the text from Heiner Müller Landschaft mit Argonauten. Medea, child of the Sun, a foreign, a second-class citizen, could be Senne herself, a Brazilian in Europe nowadays: an isle of fascination and fear for and of foreigners. Cultural (or should we say financial?) identity was a central issue of the performance. The meanings, the reasons and how is to be a Brazilian in Germany and Europe.

I had made a set of field recordings in São Paulo (where we both come from) that were used as material for soundscapes with which I tried to find where our internal soundscapes meet the everyday-life ordinary and familiar sounds. Two of these soundscapes were immediately incorporated in the rehearsal and research process. In the meantime I developed with Supercollider new soundscapes, mixing field recordings made both in São Paulo and Berlin, in a way that should be easy and flexible to be adapted and follow the creative processes of the performance.

There are three instruments made of code. Two for the field recordings. One makes more chopped bits of sounds and one alters the speed of the reproduction like a turntable. Both are made to be as transparent as possible. With that I mean it shouldn’t be really clear what they do. The layers and textures they make have somewhat of an analog approach of dealing with the samples. The third instrument is percussive and tonal made only from white noise. The different envelopes make it behave as various instruments and also gives spacialization.